A STRONG emphasis on technology adoption was recognised last week when Victorian red meat processor Frewstal was announced as Woolworths’ protein supplier of the year for 2019.

Frew Group managing director Robert Frew was on hand to accept the Woolworths award on his company’s behalf.

The Frewstal processing plant near Stawell in Victoria’s Wimmera region handles around 6000 lamb each day, being among the region’s largest employers with around 500 staff. Frewstal has been Woolworths’ lamb processing partner in the region for more than 35 years, delivering around 9000 lambs a week into the Woolworths supermarket network, in both chilled and case-ready form. 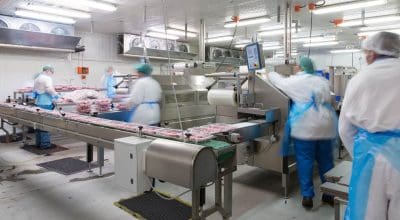 Frewstal has made a series of major investments over the past five years, driving improvements in efficiency, productivity, sustainability and shelf-life in its products.

Here’s a brief summary of some of those projects, and the impact they have had on the business:

Frewstal is part-way through a major solar energy installation project that is expected to ultimately see about 68 percent of the plant’s power requirements derived from renewable sources.

The project was initiated following dramatic rises in gas and electricity charges over several years, which saw some gas bills double in size, without that ability to pass on that cost to customers.

Stage one of the solar project, already completed, saw the installation of 2500 solar panels that currently generate 30pc of the plant’s annual power usage. A further 3000 panels will be installed early next year, taking total power generation through 5500 panels to 1.7 megawatts. Some of the panels are located in an array on the roof of the plant’s stock receivals yard, others are above the maintenance buildings, and the final installation will be free-standing, located in a nearby paddock.

The project is expected to deliver a four-year return on investment.

In combination, the total panel array should deliver around 68pc of the plant’s electricity requirements, making Stawell one of the most energy-efficient red meat processing plants in Australia.

The company will also commission a new energy generation system in January, replacing most of its current gas needs with a sawdust-based biomass project. The sawdust is a waste by-product from nearby sustainable timber industries based on woodchipping, located further west. Trucks used to deliver rendering material from the plant to a factory near Keith in SA do the return trip loaded with the sawdust material to fire the plant’s boilers.

Frewstal is in the early stages of installation of a DEXA X-ray unit, which should be operating at commercial scale by June next year. The installation is being made for carcase feedback reasons, rather than specifically to instruct robotic cutting systems.

“For our application we believe the hot version of DEXA is by far the better system, because it delivers the ability to provide immediate fat/meat/bone yield feedback to growers, and allows us to draft-off information for carcase sortation purposes,” Robert Frew told Beef Central. 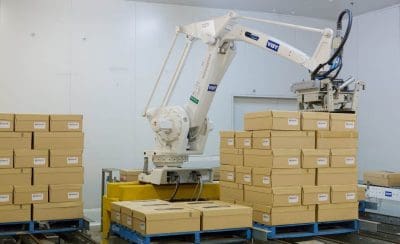 Carton stacking robot in the Frewstal lamb plant near Stawell

“Instead of having people making carcase composition decisions on dead-reckoning, when deciding which market a particular carcase goes into, we will get much closer to the target on each carcase. And given the very tight margins that apply in the meat processing industry, we’d only have to make an extra dollar or two on each carcase decision to make it worthwhile,” he said.

Automation using cutting robots is not part of the company’s immediate plans following the adoption of DEXA, because bodies are cut and deboned at the plant in a number of different ways to suit different domestic and international customers.

“Automation in our application is not warranted at the moment, but the robotics and automation field is getting better all the time. It’s one of those areas that if we hang off it a bit longer, it may become more compelling,” Mr Frew said.

The business has already embraced robotics in another part of the business, for stacking pallets of finished cartons before consignment.

Four years ago a new freezer/chiller facility was completed, with a capacity of 168 tonnes which enabled product to be supplied direct to port, in the case of export product. The automatic indexing lamb chiller also serves to reduce handling and increase shelf-life.

“We’re impressed by Frewstal’s continued innovation and long standing commitment to excellence in meat production. The company’s early adoption of new technology has made it a leader in its field,” he said.

Robert Frew said his company was proud to receive the award, and would continue to work closely with Woolworths to improve presentation and yields through innovation, capital investment and best practice – as it had over many years within the protein sector.

“We frequently invest in new packaging and processing technology to enhance our business, and we offer our thanks to Woolworths for their proactive support within our sector,” he told the awards audience.

“We believe that re-investment back into new technologies, or best practice is an investment in the future,” Mr Frew said.

“Our quality processing standards have enabled Frew Group to build a strong and respected relationship with our clients, and to establish long-term agreements with our trading partners.”

The Supplier of the Year Awards recognised suppliers to Woolworths in 14 categories.