WITH a difficult spring forecast by the Bureau of Meteorology, many beef producers remain in drought management mode, with daily decisions regarding feeding and management a constant equation.

Underpinning these decisions are an on-going series of questions such as the value of feeds both as an on-farm cost per unit of energy; and the amount required to meet livestock needs. 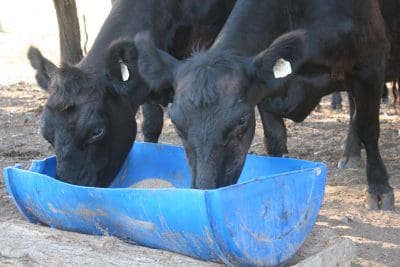 One of the key tools supporting these for hundreds of producers has been the NSW DPI Drought Feed Calculator. The calculator was originally developed as an on-line tool to allow producers to compare the cost differences between feedstuffs landed on-farm on a dry matter basis.

The value of the tool was to provide a cost per unit of energy and per kilogram of protein, quickly allowing producers to see the best value feed among the options they had available.

The evolution of apps saw the Drought Feed Calculator become one of the most valued tools available for rapid decision-making in the paddock or when speaking with feed suppliers. The app extended the concept of decision support by allowing producers to calculate rations of up to three feed types to determine the ration cost as well as energy and protein levels with the ration.

Of most value, producers could enter the livestock they intended to feed, either cattle or sheep. Inputting the animals’ weight and production status, as well as a choice of their ration mix or one of three available feeds, the app then calculates daily ration amounts on an ‘as fed’ basis, as well as providing a cost per head per day, and a total cost for a producer-defined feeding period.

For many producers, this app was an essential support as they managed their drought programs. With variations in feed availability, feed value and cost, choosing the best buy was often seen as adding to stress and fatigue levels.

In the past few weeks NSW DPI has released a significantly upgraded version of the app.  Known as the Drought & Supplementary Feed Calculator, (DASFC) the upgraded tool offers producers a number of enhancements.

Retained within the app is the ability to compare feeds on a dry matter, energy and protein basis. The upgrade now allows producers to enter and save their own feeds using feed test results. Lead developer of the app, Wagga Wagga-based livestock development officer Geoff Casburn, describes the new functions as a game-changer for a lot of users.

“We can now save feed tests in a data base, so you can always have that record to refer to. It allows mobs to be saved, and they can be copied so the user isn’t constantly loading or losing the records they have.  So it saves a lot of time.”

“More usefully, when we get back to normality where there are pastures that are being grazed that may need some supplementation,  the upgrade allows producers to see the amount of pasture in an animal’s daily diet and help match supplements to meet the daily needs of their chosen animals.”

Unlike the early version, the current app requires producers to select their pasture types, either temperate or tropical species. Producers then estimate the height and digestibility of that pasture before viewing the results in terms of livestock intake and the deficit between pasture intake and livestock needs. This allows the app to be used by producers in any state with either cattle or sheep programs.

The DASFC app increases the feeds producers can now include in their own ration formulation to five ingredients, while allowing summary pages to be exported to other locations. “We know many people wanted to show their calculations to advisors, so this export function was a useful inclusion,” Mr Casburn said.

For many producers, the feeding process is as much about time allocation to mix rations and to feed out to stock. An inclusion in this version are calculations not only on feed quantities for livestock, but also auger timings when mixing rations and feeding out, based on mob size and feeding frequencies.

While this upgraded app offers greater information to producers, it should be seen as an enhanced tool to make planning and decisions a more considered process.

The app is available through the App Store and Google Play as a free download.  Once producers have installed the app, its use does not require internet or mobile connection, making it valuable for in-the-paddock use.

There is also an online version for web based users, available via https://www.dpi.nsw.gov.au/dasfc