CHARTERS TOWERS cattle producer Michael Lyons, Wambiana Station, made the trip to EvokeAg in Melbourne to find out first-hand what is happening in the agtech space.

Mr Lyons is actively involved in northern beef industry research and is a Nuffield Scholar, but felt the rapidly expanding field of ag tech was one he needed to learn more about. “I have been fairly naive in the area of agtech, so it was an opportunity to have a look and see what is going on,” he said.

Mr Lyons said he was amazed to learn “just how much is happening” in the area, while also noting that most of the innovation on display at EvokeAG was oriented more towards food tech and cropping systems than livestock.

Mr Lyons said he sees potential for ag tech in helping northern cattle producers, who want to expand but are being constrained by high land prices.

“We are a business that wants to grow, so we’re looking at how we can either eliminate costs or produce more from what we already have, by utilising technology.”

He believes there is significant further scope to develop productivity.

“Certainly in the genetics area, we have a core of high performance animals and are analysing DNA using Genomics to increase the accuracy of predicting those high all-round performers, breed the horns off them by selecting for the poll gene and use IVF to shorten the generation intervals.”

The rapidly developing field of plant based proteins received front and centre prominence at the EvokeAG Conference.

Mr Lyons said it was interesting to hear Mike Lee, a food futurist from New York make the point that for the first time, young people now spend more money on food than on fashion, and now see their food choices as a central part of how they identify themselves and present themselves to the world.

This has lead to the rise of diet identities such as “pescatarians” who do not eat meat but do eat fish or“flexitarians” who are primarily vegetarian but occasionally eat meat or fish.

Mr Lyons said that while there was a role for all proteins, he said it was important consumers did not become “too simplistic” in their decision making or dismiss the implications of where they spend their food dollars.

“If there was a strong growth in plant based proteins, it could lead to increased clearing of biodiverse habitats to create more cropping monocultures,” he said.

“Consumers may be choosing those proteins because they think they are helping the planet, but that is actually likely to be detrimental to the planet because the sequestration of carbon from well-managed grazing and rest, is part of the solution”

Asked if he was surprised by the relatively small attendance by producers at the EvokeAg conference, Mr Lyons said a lot of the innovation at the event was at the start-up or cutting edge level, whereas producers were more likely to be interested in products already proven and ready for implementation.

Some of the more practical innovations on display at EvokeAG may be put in front of producers in North Queensland, with Mr Lyons also using the event to scout for possible innovations to showcase at a Beef Up Forum being planned for Charters Towers in June this year. 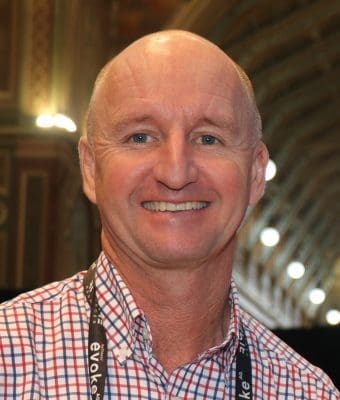 Dr Menzies joined Hancock Agriculture five months ago in the role of Program Manager – Technology & Innovation and took the opportunity presented by EvokeAg to explore the various types of emerging agricultural technologies on display.

Catching his eye in particular were applications for livestock pricing, water telemetry and in particular the field of autonomous robots.

“The robotics here have more application for more intensive industries, and for livestock it is a little more blue sky, but there are potential applications for grazing with drones and satellite imagery using Artificial Intelligence,” Dr Menzies said.

“There are also potential applications for autonomous land based robots such as in moving lick out and around in the wet season.” A group of young beef producers from Northwest Queensland making the long haul to Melbourne’s EvokeAg were keen to look at new technology options to help their businesses – but remained wary about taking-on unproven technology or systems where post-sale service might be found wanting.

DAF Queensland coordinated the visit to the event for five young producers from the southern and northern gulf regions.

“The idea was to bring down a group of younger, more tech-savvy producers to see what’s coming up in the agtech space,” said DAF Cloncurry-based extension officer Eloise Moir, who chaperoned the delegation.

While he was impressed by the thinking behind a wide range of technologies on display, Robert Chaplain from Wynberg, Cloncurry said he had hoped to see more items that were specifically applicable to beef.

“Especially in an extensive scale, lack of connectivity is still a big issue in our area. Many of the products being showcased rely on decent internet access, so that needs to improve of its to be of any value in our region,” he said.

“For us to take advantage of any new technology innovation, we have to have a reliable internet access, otherwise it just falls by the wayside.”

“And the back-up service needs to be there to support the user. As soon as something breaks down, you need to know there is a good support network there to troubleshoot, and get it operating again.”

“It’s good that the conversations are being had, but we need to get the voice of people in more remote parts of the country, who face particular challenges when it comes to tech and connectivity, being a part of the development phase.”

Mr Chaplain saw a lot of good in having a tech event for farming in the middle of Melbourne.

“There’s not just farmers here – there’s scientists, investors and developers, and everybody in between. Having this event here shows the broader community that agriculture is looking for solutions for the future, and it’s not all doom and gloom. We’re receptive to ideas.”

“Some of this new tech will help validate some of the changes being made in farming systems to provide evidence of improvement and greater sustainability, through satellite mapping and other systems.”

Asked how much faith he had that tech would be a ‘game changer’ in his business in years to come, Robert Bulley from Moonamara, near McKinlay said it had the potential, each technology was cost effective and user-friendly.

“There’s already lot of tech options out there, but at the moment issues like connectivity, and scale in northern cattle operations mean it may not yet suit to us,” he said.

Several of the group members were involved in applied on-farm trials in tech areas like automated walk-over weighing systems.

“For me, the attraction in any new piece of tech is in improving productivity. But with any improvement in productivity comes better profit, and better sustainability – everything follows.”

Labour saving was a big attraction for most of the northwest Queensland group.

“But I was surprised there weren’t more producers at this event,” Mr Bulley said.

“I don’t know if that was because they still don’t see much potential – there’s still a disconnect among some people – or whether people are just busy after rain.”

Sam Fryer from Railview, near Prairie, said some technologies, like remote water monitoring, appeared to be well on the road to wide adoption. “But a lot of other ideas we saw are still at the start-up stage, and appear to have a long way to go,” he said.

He said among the dozen of items and products on display, there weren’t necessarily a terrible lot targeted at the beef industry.

“But some of the technologies being directed at more intensive agriculture might have some future application in beef. Robot sprayers for weed control in farming, for example, could someday be used for spot spraying woody weeds in grazing paddocks. It’s not that far away.”

Mr Fryer  saw potential in displays on GPS tracking systems for livestock, and satellite imagery for better understanding and monitoring of pasture biomass.

“None of this takes away from the need to constantly eyeball paddocks and cattle yourself, but it’s a tool that can add to a producers’ knowledge bank. Checking paddock biomass using the Cibo Labs’ satellite images might one day become a daily morning routine, just like checking the weather forecast, emails and facebook.”

Asked why he had not yet adopted such systems, he said finance after a very dry year was one factor, and secondly, a wariness about after-sales service on new technology – particularly in remote areas.

The operation at Railview is already a regular user of automated water medication systems to provide urea and trace minerals to stock. “That’s an older, existing technology, but they are now talking about doing more with it – turning pumps off and on remotely, for example, and monitoring what is being put through the system,” he said.

“NLIS tags are the same. It’s now an old technology, developed in the 1990s, but are we as an industry using it to best advantage?”