ONE year ago Meat & Livestock Australia and Carwoola Pastoral Company near Canberra joined forces to put a wide range of ag tech products to the practical and economical test on the property.

Carwoola Station manager Darren Price says the experiences of the past year have given him a positive view about the return on investment and business change that is possible from the use of ag technology.

Mr Price said 40 water monitoring sensors have been tested across Carwoola as part fo the trial, and, in general, all had worked well.

The average cost to the business of physically monitoring water levels in tanks and troughs works out to around $20,000 per year, he said.

The remote water monitoring technologies have reduced the need for physical inspections on Carwoola by 70 percent he said – “quite a good pay back.”

None of the devices removed the need for physical checks completely, but they all provided a good early warning system of problems.

A ‘water run’ can now effectively be done with the glimpse of a single screen showing water levels in tanks around the property.

Mr Price said he was able to monitor water levels on Carwoola while he was on a recent trip to Canada, and also from the Red Meat 2019 conference in Tamworth this week.

He said the technology provided a great level of comfort, and a mental break from the paddock in times of drought. 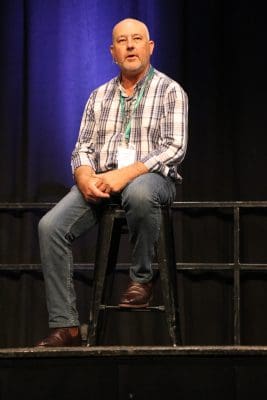 Other successes have included the use of an air-operated auto drafting system which has increased the speed of drafting cattle through a three-way draft from less than 80 cattle per hour to 200 per hour. At the same time an RFID scanner accurately records weight gains for each individual animal.

Mr Price said cattle moved through the system quietly and calmly. While the high cost of the system meant pay back would take time, the speed and efficiency of handling had been very positive.

Smart tags are also being used to track bulls during joining, and can quickly highlight if bulls have an issue and need to be replaced. Mr Price said a 5 percent improvement in calving rate across 1000 breeders would equate to a $35,000 gain.

The tags also provided a useful indication of grazing patterns and areas of a paddock that were not being utilised.

Operating two 23ha centre pivots is the most expensive part of the business, Mr Price said,

Round the clock monitoring with remote soil moisture probes has heped to provide greater accuracy in scheduling irrigation events and to maximise water use efficiency.

“I haven’t seen a stressed Lucerne plant since I have been working with these tools.”

On average time spent checking pastures equates to an annual cost of $8500 per annum, he said.

Cibolabs’ satellite pasture measurement technology significantly cuts down on that time and ensures pastures are routinely assessed week in, week out.

“I can do this while I’m eating my Weet-Bix every morning,” Mr Price said.  “It is a fantastic tool.”

Carwoola is also testing drone technology that can objectively count livestock as it flies over a paddock, while also undertaking weed identification and fence checking from the air.

“It means I can better utilise my labour elsewhere,” Mr Price said.

MLA is also conducting a similar Digital Livestock Project at Romani Pastoral Company’s Windy Station near Quirindi on the Liverpool Plains, and that project is just getting underway.

As with Carwoola a wide range of technologies are being deployed for testing on the station.

Perhaps one of the greatest scopes for technology to make a difference on Windy Station will be in water monitoring.

The Windy Station operation comprises two properties which are 15km apart, with boundaries 37km apart at their widest point.

A typical water run requires a minimum of 200km driving and must be conducted four days a week. 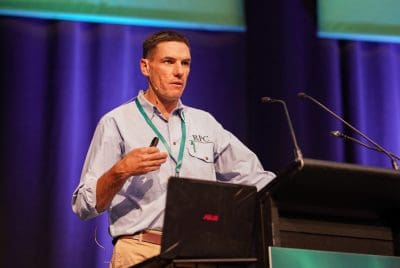 He estimates the total costs of water runs adds up to over $100,000 for the business each year, and believes there is significant scope for efficiency gains on the property, provided they can find the right technology.

12 service providers are being tested across Romani Pastoral Company as part of the project with MLA, which will include monitors on 29 water tanks and 43 water troughs.

Results from the trial are expected to be shared at next year’s Red Meat event.