IT’S hard to imagine there has ever been a better time to be a small business trying to break into agriculture than right now. 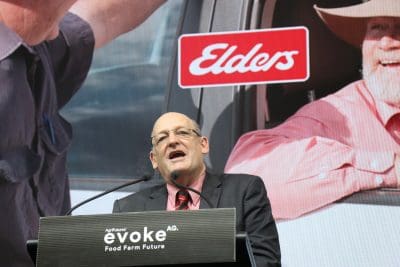 Producers are highly receptive to new technology that can solve genuine problems or save time, and ag-tech startups now have unprecedented opportunities to promote their innovations through digital media and conferences like the huge EvokeAG event held in Melbourne last week.

Back in the pre-online and social media era, aspiring ag ventures which lacked the resources to advertise in rural media or exhibit at industry conferences or field day had to attract interest the hard way, by proving their commercially in the paddock and then rely on word of mouth to spread the word.

This year 38 ag-tech startups were given an opportunity by AgriFutures Australia to showcase their products and pitch their business over two days to an audience of 1300 people at EvokeAG, including local and international investors and potential customers in the corporate, government, research and production fields.

It is an extraordinary opportunity to fast-track the startup process, and it’s little wonder so many aspiring new businesses are lining up to take advantage of it.

But amidst the hype, polished pitches and slick branding also came some words of wisdom from experience, and the reality check that any new innovation must still meet a genuine need if it is to become a commercial success.

In his opening address to the EvokeAG conference Elders chief Mark Allison urged ag-tech startups to focus on “what really matters”.

Asked to expand on those comments, Mr Allison told Beef Central that many of the problems he dealt with as an active agronomist in the 1980s are still the key issues farmers are dealing with today, including weed problems, moisture problems, weed problems and variety problems.

“Nothing has changed,” he said.

“Variable rate fertiliser makes a lot of sense, and being able to soil test or use satellite imagery to test biomass, they are just tools to solve problems.”

On the question of ag tech developments that are now making a difference in Australian agriculture, Mr Allison said progress has been “patchy”, but nominated the on-farm innovations being trialled by Meat & Livestock Australia as effective examples.

“I think a lot of the MLA endorsed innovations are wonderful and I think they will make a contribution,” he said.

“In terms of in the cropping area, a lot of the farm management systems are very similar, but they position themselves very differently.

“I think the ability for them to make a significant material impact across cropping is limited by multiple platforms and connectivity.”

“It always worries me when I get a pitch from a startup and the amount of money they want equates to three to four years of their salary and on costs, so it says to me that this is like their gap year.

“It is actually not an innovation play, it is a gap year.

“If we invest capital, shareholders’ capital, we expect an outcome.”

He also urged ag tech startups to engage closely with producers –having producer involvement “eroded the lalaland in the ag tech space because it has to be practical.”

With productivity in Australian agriculture remaining flat since 1997, Mr Allison said the innovation should be focused on increasing productivity in a profitable and sustainable way.

The industry also needed significant investment in infrastructure, particularly as the “one belt, one road” initiative in China linking Asia and Europe further exposes the inefficiency and high supply chain costs of Australia’s grain handling infrastructure.

Innovation should also focus on enhancing the sustainability of and public trust in Australian agriculture.

“Community acceptance of our industry has dropped off and given we have world class environmental standards and world class animal welfare standards, and sustainability across the board, we need to regain the confidence of the metropolitan audience.”

“That our noble agriculture industry being seen as a bad citizen, I just don’t get it.”

To resource these challenges, he suggests a portion of the $430 million in producer-generated levies that fund the 15 agricultural Research and Development Corporations should be set aside and targeted at solving one big industry problem at a time.

“Each of the RDCs generally has a sound strategy, but what we don’t have is an overarching prioritisation of Australian research and development.

“Productivity, infrastructure, community acceptance – there are a bunch of pressing issues some of this money could be combined to solve.”