THREE tonnes of Australian export beef packed out of the Northern Cooperative Meat Co plant at Casino NSW earlier this year is claimed to have been the first export beef to be tracked and verified using blockchain and Internet of Things technologies.

Destined for China, the shipment was the first under a Food Agility CRC* project, led by Queensland company BeefLedger and the Queensland University of Technology. The occasion was marked with two industry dinners in Shanghai attended by chefs and managers from five-star restaurants and hotels. A second trial shipment under the program is due to leave for China during September.

The project and the technology it uses aims to stamp out the problem of substitution and ‘counterfeit steak’ in international export markets, giving suppliers and consumers confidence that their meat is 100pc Australian in origin and as described on the pack.

The BeefLedger project is one of the first projects supported by the QUT-based $200 million Food Agility CRC, receiving a $1 million grant over two years.

The team behind the project is building a digital system using ‘smart contracts’ to replace forgeable letters of credit, developing and integrating a suite of technologies into new packaging to prevent the substitution of fake meat products, and building apps for consumers and suppliers so they can verify where their meat comes from, and learn more about it.

The project will rely on a new digital cryptocurrency called a BEEF Token, developed as part of the design and implementation of the world’s first application of distributed ledger or blockchain technology to the entire beef supply chain. “So-called ‘fake steak’ is costing Australian producers millions, putting the health of consumers at risk and damaging the Australian brand,” he said.

Crypto-technologies like blockchain could create an unbreakable, immutable record, tracking a product from paddock to plate, credentialing the provenance of the produce, and giving confidence to consumers, Dr Briers said.

The BeefLedger company builds connected supply chain systems for the beef industry. Its chairman, Warwick Powell,  said the new technologies do more than track provenance, and promised to be a ‘game-changer’ for the Australian food industry. 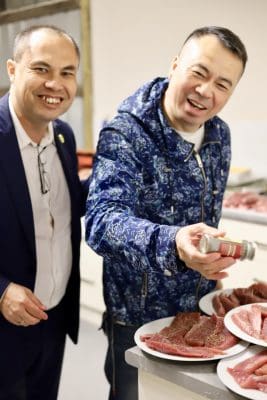 “We can also encourage members of the supply chain to do the right thing by offering economic incentives through newly established cryptocurrencies, and latest insights from behavioural economics.”

BeefLedger beef had now been showcased in Beijing, Shanghai, Wuxi, Changshu, Chengdu, Wuhu and Guangzhou, Mr Powell said. “This is just the tip of the iceberg as we focus on providing discerning Chinese consumers with products that they can be confident in. We look forward to supporting other Australian beef brands to sustain provenance-based value in the fluid and rapidly growing China market place,” he said.

Professor Marcus Foth from the QUT Design Lab, said modern consumers were increasingly demanding trustworthy information about where their food came from, its environmental footprint, and whether animals were well cared-for.

“How consumers interact with food provenance data is one of the things we’re particularly interested in. Digital experiences that draw consumers closer to the source and producers of their food are central in shifting the agrifood system to more sustainable practices,” he said.

Dr Briers said the project, which is co-funded by the Food Agility CRC, QUT and industry partners, was one of the CRC’s largest investments to date, exemplifying its mission to foster cross-industry collaboration.

Blue Lake principal Michael Famularo is developing an integrated supply chain aiming to turn off 1500 cattle a year using his own cattle and a network of dedicated local cattle producers, a nearby backgrounding property and a 500-head shedded feedlot. Most of the turnoff, between 150 and 200 head per month, are currently directed into Coles supermarket programs. In 2017, Blue Lake was crowned South Australia’s best performing herd for MSA eating quality.

As part of the broader Food Agility project, technology is being used to share the production story behind the Beef Ledger project’s Australian beef in China.

Imagine a customer in China scanning their restaurant menu with their phone and being able to watch a video about Australian beef farmers before they tuck into their prime Aussie steak.

That’s one of the scenarios that QUT researchers and South Australian school students are working towards as another part of the international Food Agility CRC project.

Their mission is to create digital stories about Australian farmers and agriculture that can be shared with Chinese diners and shoppers. In doing so, they will add weight to the wider drive to demonstrate the authenticity of Australian beef exports and stamp out ‘fake steak’ in markets like China.

A delegation of chefs and restaurant owners from China recently visited Mount Gambier to visit Blue Lake Station and feedlot that has supplied cattle into the trial program. They also met and interacted with Year 10 secondary school students who are putting together stories about their local farms.

The visitors were hosted by QUT and BeefLedger, with help from the Chef Outta Water consortium.

QUT and BeefLedger are planning to bring the same Mount Gambier school students to Brisbane later this year to see one of the world’s best examples of using technology to share information and stories – the two-storey high interactive screens of ‘The Cube’ at QUT.

The students will also meet with QUT’s data visualisation experts to brainstorm ideas on interesting ways to present data relating to the export beef project.

“Ultimately, we want to share the content the students create with audiences in China to help promote the quality and authenticity of Australian beef,” he said.

“The audience might be Chinese diners in a restaurant who scan their menu, or shoppers who scan QR codes on their meat.”

During the delegation’s visit the students got to interview the Chinese chefs about their expectations of Australian beef. They have also been working with local beef producers, and visiting farms and feedlots to film and learn about digital farming, the Internet of Things, and data analytics.

*  About the Food Agility CRC:

Food Agility CRC is a $150 million innovation hub that is creating new digital technologies and services to benefit the Australian agrifood industry. Partners include agrifood businesses, technology companies, research institutions and government organisations. Together they represent a broad cross section of the food value system. The work is funded by the Australian Government under its Cooperative Research Centres Program and by our partners.