AUSTRALIA’S booming agtech scene is attracting attention from domestic and international investors. With its disruptive approach to logistics and the supply chain, some think AgriDigital may be the first local start-up to scale into a globe-straddling behemoth.

Although they’ve proved serviceable for millennia, agricultural supply chains have their shortcomings. Four years ago, three farm-owning serial entrepreneurs decided to harness an emerging technology to address just that. 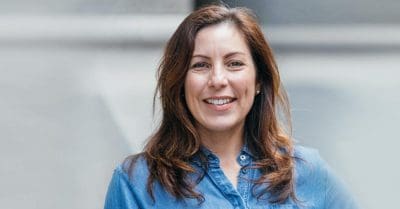 “In late 2015, my co-founders and I were looking to start a business that could solve a large problem,” AgriDigital’s Emma Weston says. “Collectively, the three of us have 85 years’ experience working in agriculture and are all too aware of supply-chain issues such as transaction security, payment security, lack of digitisation, data fragmentation and food fraud.”

“Then there are the related issues, such as most farmers (and many SME traders and site operators) being unfinanced or underfinanced because the way traditional supply chains operate makes it difficult for them to provide timely financial data to lenders.”

Ms Weston and her partners, Bob McKay and Ben Reid, suspected an emerging technology that was starting to attract a lot of attention could prove to be a magic bullet.

“The standard way of handling transactions,” Weston explains, “has been for buyers and sellers to each separately record details of transactions using ink and paper. Or, more recently, an Excel spreadsheet or bespoke software program. This involves a lot of data replication and reconciliation, as well as opportunities for mistakes or mendacity to creep in.”

The solution? A blockchain-enabled transaction platform

“AgriDigital provides sellers, buyers and storage operators with a digital platform,” Weston explains, “the ‘transactional engine’ for the movement of a physical commodity through a supply chain, as well as the movement of payments to farmers.

“All the necessary transactional capabilities – contracts, receivables, inventory management, invoicing and payments – are built into the platform. Everything happens within the platform, which makes it what tech types refer to as a ‘single source of truth’.”

A truckload of oats

By late 2016, Ms Weston and her partners were so confident in their platform prototype they attempted the world’s first live settlement of physical commodity via blockchain. A year later this was extended to settlement and provenance in a pilot conducted with Australia’s largest grain exporter, CBH Group.

A truckload of organic oats from a farmer was delivered to a CBH Group facility. After they were weighed and quality tested, ownership of the oats was transferred from the farmer to CBH Group and payment was transferred from CBH Group to the farmer. He had the money in his bank account before he started his truck to drive home and CBH Group had a full digital record of the transaction’s details from AgriDigital.

“To our surprise, what we saw as simply an experiment made news around the world,” Ms Weston said. “It proved blockchain transactions weren’t just for financial services markets. Since then, well over 100 similar experiments or pilots have been done, including by the likes of IBM and Louis Dreyfus. Sellers are excited at the prospect of not having to wait to get paid and buyers are thrilled at the prospect of slashing back-office costs.”

The good news was that blockchain-facilitated physical commodity transactions seem destined to become the norm, resulting in most involved (apart from back-office staff) being better off. However, Ms Weston predicted they won’t achieve mass penetration until the mid-2020s.

“For a platform to take off, a critical mass of buyers and sellers have to choose to use it,” she said. “That what’s happened with Uber and Airbnb… but it’s not going to happen overnight.”

It’s still early days but AgriDigital looks like a leading contender to be Australia’s first agtech unicorn. As of early 2019, it had 8500 registered users across 30 countries and more than $1 billion of transactions have been executed using the platform. It’s been accepted into prestigious accelerator programs from Sydney to San Francisco and has won a plethora of tech and business awards.

When AgriDigital held a Series A funding round in 2018, one of Australia’s ultra-high-net-worth families, along with Square Peg Capital, kicked in $5.5 million. AgriDigital’s first overseas office was set to open in Chicago in May.

“We always wanted to create a global business,” Ms Weston says. “I believe that’s feasible because there’s something for everyone in AgriDigital. We’re taking the industry on a journey to digitise the supply chain and then to be able to access the benefits of blockchain.

“This isn’t just for first-world nations like Australia, whose farmers are producing premium produce and can use blockchain in an effort to combat food fraud. It’s also for developing countries, which aren’t as bogged down with legacy infrastructure and could gain a competitive edge by being early adopters of a blockchain-enabled platform. Everybody wins when supply chains become more efficient and transparent.”

And AgriDigital is poised to win very big indeed if it secures a leading role in digitising the world’s agricultural supply chains.

“Agriculture is one of the world’s largest but least digitised industries,” Ms Weston said. “The potential, both for AgriDigital and other Australian agtech start-ups, is enormous.”