WESTERN Australian bulk handler CBH Group has seen a major increase in the use of its CDF app over the harvest just finished which saw 9.7 million tonnes delivered to its sites. 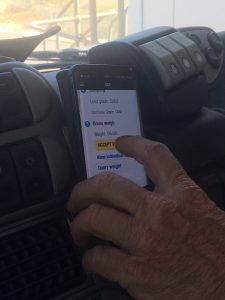 While tonnage was well done on the 16.4Mt received in the 2018-10 harvest, a highlight for Australia’s biggest cooperative was seeing a jump in the percentage of loads delivered using the CDF app.

“We aim to find the balance between maximising marketing opportunities for growers via offering additional segregations, costs incurred from offering those segregations, and what is practically possible on sites,” CBH general manager operations Ben Macnamara said.

“The use of technologies like Paddock Planner and the CDF app also assists CBH to plan segregations.”

Of all the tonnes delivered to CBH this harvest, 91 per cent came in using the company’s CDF app, up from 69pc in the previous harvest.

CBH said the CDF app had helped to smooth the delivery process, interpret site cycle times and identify bottlenecks, and the information had allowed site managers to act quickly to address issues, and point to where investment was required in the future.

“Cranbrook was one of nine network strategy sites that received a major upgrade prior to harvest.

“Works to improve traffic flow also helped reduce cycle times for growers at the site, with an average cycle time of 42 minutes, which is a significant improvement on last year.

“The performance at Cranbrook is particularly impressive considering that the site had a record-breaking season,” said Mr Macnamara.

Across the CBH network, the average delivery cycle time was 37 minutes, down from 43 minutes in the previous harvest.

The improvement has been attributed to a combination of improved site processes, better use of technology and a smaller crop.