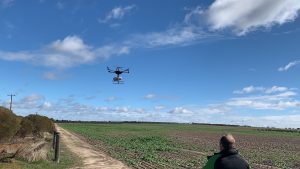 PRECISION-agriculture intelligence platform Taranis has entered into a partnership with Stratus Imaging to bring specialised imagery services to farmers in Australia.

Announced today, the companies say the collaboration will provide farmers in Australia with unprecedented insights to make informed management decisions regarding their fields and crops.

The company’s artificial intelligence-driven technologies then analyse the images and provide actionable insights from the field directly to the farmer.

In combination with high-speed unmanned aerial vehicles (UAV) operated in Australia by Stratus Imaging, and manned aircraft, Taranis has said it enables farmers to detect threats at their earliest stage.

Stratus Imaging is a Perth-based company which uses UAVs to collect low-altitude and high-quality crop data and create geo-referenced maps and supply data to farmers and agronomists.

“We look forward to delivering value to this region, as we have been in others,” Mr Schlam said.

“We are excited to work with Taranis to bring much-needed precision-imaging solutions to famers in Australia who are experiencing the devastating effects of drought right now,” Stratus Imaging director and general manager Jonathan Smith said.

“The ability to provide farmers with sub-millimetre resolution over vast hectares and on this scale is ground-breaking.

“Together with Taranis, our customers will be able to reap the benefits while cutting down on costs and irrelevant resources.”

Taranis targets high-volume commodity crops such as corn, cotton and sugarcane, and claims use of its technologies can allow farmers to address issues in real-time and increase yields by up to 7.5 per cent.

The company employs more than 100 people worldwide and is headquartered in San Francisco with subsidiaries in Israel, Argentina and Brazil.