Among the self-driving machinery to be used at the site will be harvesters, tractors and sprayers, and the results of their operation will be used to develop the Cognitive Agro Dataset.

Cognitive Pilot is a joint company of Sberbank, Russia’s biggest bank, and Cognitive Technologies, the developer of AI-based autonomous driving systems, some of which are already in use in public and private ground transport.

“The goal of the project is to create a unique tool that will allow software developers of autonomous agriculture control systems to effectively solve the problems of neural-networks training on real data,” Cognitive Pilot CEO Olga Uskova said.

“We plan to create the world’s largest and most representative database for smart agriculture.”

All information contained in Cognitive Agro Dataset is intended for non-commercial use and will include images and clips from video cameras and data obtained from odometer and inertial sensors installed on autonomous machinery.

Cognitive Pilot data has previously been collected in Russia only at sites where the company tests its autonomous driving technology.

Last year, the company started collecting data in Brazil, and this year expects to follow suit in Argentina, Canada, China, South Korea and the United States.

“The main works are going to be held in conjunction with the harvesting cycle worldwide, and we hope that the coronavirus pandemic will not prevent us from carrying out our tasks.”

The dataset will consist of 80,000 10-second videos, and the developers plan to complete the work and publish the results early next year.

“This partnership and the launch of the new training facility will let us recreate the widest variety of different cases and situations, including different weather and lighting conditions, which are of the highest value for database development.”

“We are ready to provide Cognitive Pilot with our skill and knowledge in agricultural business, as well as our resources for solving the industry’s most vital tasks,” says major PAG shareholder and board member Vladimir Yalovenko said.

PAG’s primarily produces grain and industrial crops on 35,000 hectares in the Rostov region north of Moscow, and operates more than 200 specialised agricultural vehicles.

“It’s one of the most advanced agricultural holdings in the country in terms of the use and implementation of innovations,” Ms Uskova said. 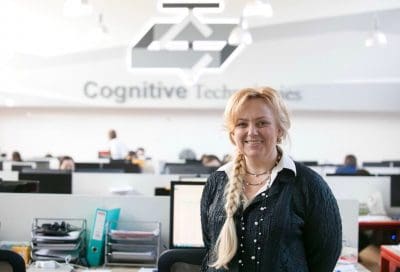 “Synthetic datasets with data modelled or enriched artificially are less effective than ones with real data.

Cognitive Pilot said few datasets exist in the agricultural sector, and have so far been used mostly for localised tasks like spraying.