CONNECTIVITY issues remain one of the key reasons why the extensive cattle industry lags behind other forms of Australian agriculture in technology uptake, a national survey suggests.

ABARES this week released a comprehensive report on how information, communication and technology (ICT) is used in Australian agriculture. The report also identifies the key differences in adoption between farm sectors and between small and large farms.

The report presents findings from 2200 face-to-face conversations with farmers across Australia.

Ninety six percent of Australian farmers own and use ICT, and they are investing in technologies that suit their production systems, the report found. ICT includes all digital technologies used for the electronic capture, processing, storage and exchange of information. Examples used on farms range from computers and telephones through to tools like GPS-guided harvesting equipment and remote sensing technology.

“It is evident that new equipment and the data it generates are changing how farms are managed,” ABARES executive director, Dr Steve Hatfield-Dodds said during the report’s release.

“New ICT will be fundamental to the next wave of productivity growth in Australian agriculture. The use of digital ag in Australia has the potential to increase productivity through optimising input use, more timely decision-making, labour savings, genetic gains and improved market access,” he said.

Some of the report’s key findings were:

New ICT equipment and the data it generates are changing how farms are managed, the report said.

Quantifying the effects of these changes is difficult, however. It has been estimated that fully implementing all currently available digital technology could increase agricultural production by up to 25pc compared with 2014–15 levels.

“Realising the benefits from digital technology requires farmers and graziers to adopt and use these tools,” the report said.

“Farmers invest in ICT, like they do in other technologies, when they perceive that benefits exceed costs. Complexity and uncertainty about the benefits generated by new tools tends to slow adoption, because it reduces the expected value of benefits until sufficient learning can be done to obtain the required information.”

Currently, many ICT applications on farms appear to be characterised by high complexity and uncertainty, largely because these technologies are in relatively early stages of development in Australia and globally, the report said.

As the technologies mature and uncertainty is reduced, benefits and costs will become clearer for farmers to assess. Similarly, as the costs and benefits of access to this technology become clear, investors and others will be in a better position to solve constraints such as access to telecommunications infrastructure.

The intensity of ICT ownership varies across industries. ICT assets accounted for 3.3pc of plant and equipment capital on grain farms, 2.7pc on vegetable farms, 2pc on dairy farms and 1.9pc on livestock farms

In 2016–17 investment in ICT on grain farms was not as intense as in the past—ICT’s share of investment was lower than its share of assets. In contrast, other industries appear to have invested more heavily in the survey year than in the past – ICT made up a larger share of capital investment than the share of capital assets already owned. This difference is likely to reflect greater investment in ICT by grain farmers in earlier years and is also reflected in the replacement value and age of ICT assets held. 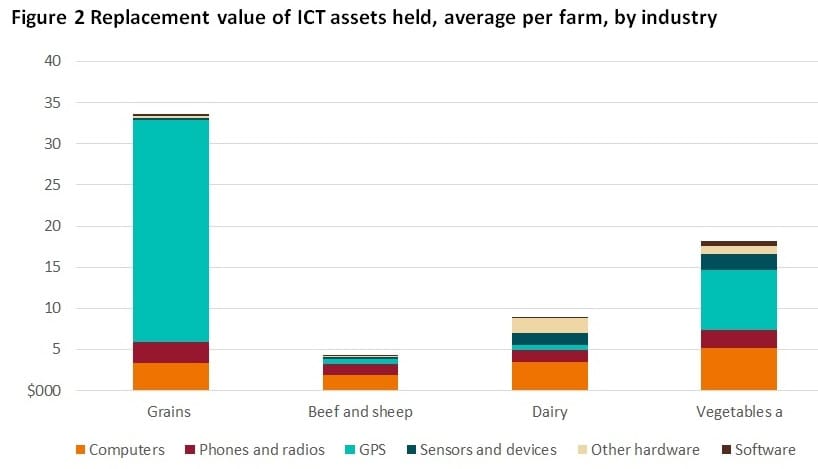 Farmers own technologies to suit their production systems

The type and value of ICT assets that farmers owned varied by industry, reflecting the specialisation of technologies to particular production systems. The most striking example of this was on grains farms, where investment in GPS-guided equipment and harvest monitoring technologies is widespread. In 2016–17 grain farms held ICT assets with an estimated replacement value of $34,000 on average, with 80pc of this value in GPS equipment.

In contrast, beef and sheep farms reported the smallest replacement value of ICT assets. There is limited uptake of precision agriculture on these farms, where production systems often rely on extensive pasture grazing. Digital technologies are increasingly available to manage livestock, such as electronic identification systems combined with satellite monitoring, but adoption of these technologies remains concentrated in more intensive livestock industries such as dairy.

One reason for greater investment in ICT on larger farms is that these farms generally have higher profits, which may increase their capacity to fund investment. Larger farms can also spread new technologies over more inputs and outputs, increasing the benefits from adoption.

Reflecting these factors, new technologies may also be marketed more towards larger farms because they are more likely to adopt them, increasing the likelihood of sales for technology developers, the report found. 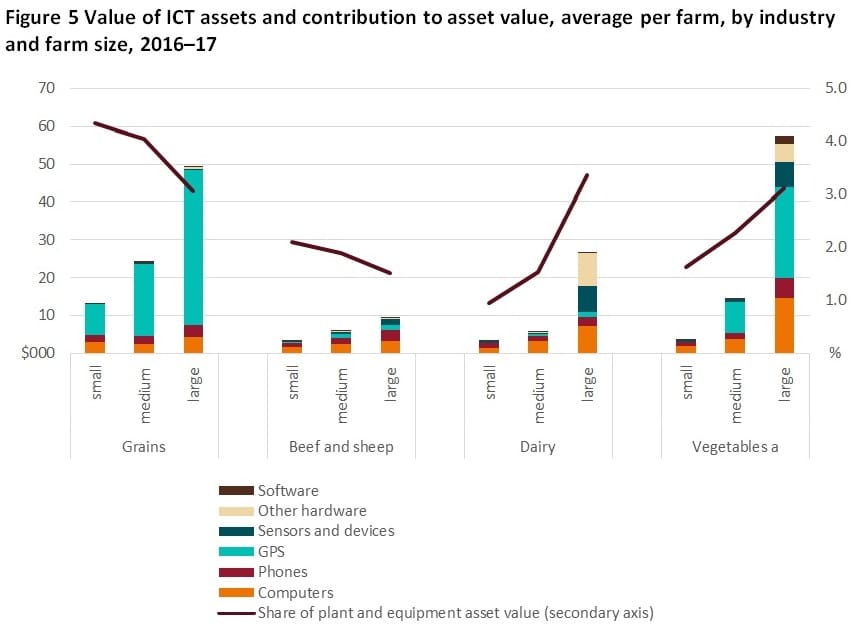 Use of ICT assets

Farmers were asked about their use of ICT assets across four broad categories—marketing and managing contracts, record keeping and input management, operating equipment and managing production, and gathering information. Results are shown below.

Across all industries, record keeping was the most commonly reported use of ICT assets, with 80pc of farms now using ICT for this purpose. Electronic records can make it easier to capture information, generate reports and share data with service providers and customers. Nonetheless, some businesses still preferred to keep manual records. On average, farmers not using ICT for records management and book keeping tended to be older or operating smaller farms.

The majority of farmers (61pc) also used ICT for marketing and managing contracts, although face-to-face marketing also occurs widely in all industries. Grain and dairy farmers were more likely to use ICT for this purpose than other farmers, likely reflecting the relatively homogenous nature of these commodities, which facilitates online marketing.

Information gathering with ICT was also widespread across all industries (61pc of farms). The use of ICT to access information was correlated with farm size—larger farms were more likely to report using ICT for this function.

Farmers were asked to report the main impediments to adopting new ICT tools across five broad categories – skills, internet access, cost, nothing new of interest, and other. Results are shown below. 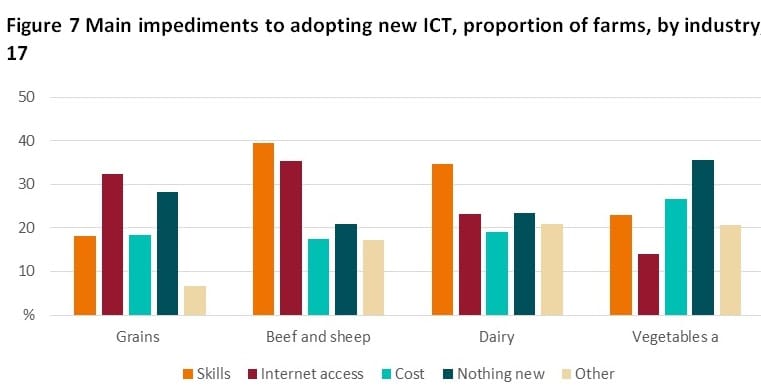 Approximately one-third of farmers reported that a lack of skills was a constraint on their uptake of new ICT tools. The operators of smaller farms reported skills as a constraint more often than other farmers. Across all industries, 40pc of small farms reported lack of skills as an impediment, compared with 25pc of medium-sized farms and less than 20pc of large farms. This may be because larger farms generally hire more workers and use contractors to a greater degree, making them better placed to bring in workers with the required skills, or because they have greater capacity to delegate tasks, allowing more time for training and knowledge acquisition by managers.

Acquiring skills or becoming familiar with new technologies is time-consuming and can be a barrier to adoption of innovations. In agriculture, an important means of acquiring these skills and knowledge is the use of farm advisors and farmer networks, both of which have been found to increase user-knowledge about new technologies and encourage investment.

Consistent with this, survey data revealed that farmers in industries characterised by greater engagement with external providers of knowledge and information appeared to have more of the skills required to adopt ICT. In particular, grain farmers have had a greater level of engagement with advisory services than other farmers in recent years. Relatively few grain farmers reported a lack of skills as a constraint on their adoption of new ICT, unlike livestock and dairy farmers, for whom it was the most commonly reported constraint.

A third of farmers reported that their access to the internet was impeding uptake of new ICT tools. Internet access was the most commonly reported constraint to the adoption of new ICT on grain farms and was also commonly reported by beef and sheep farmers. On dairy and vegetable farms, lower reporting of internet access as an impediment may reflect the greater availability or reliability of internet connections in more populated areas.

The extent of internet coverage over the farm was related to the perceived impediment to technology uptake. Farmers reporting an impediment from internet access on average reported a smaller proportion of their farm covered. This trend was observed across all types of internet connection.

Around 20pc of farmers reported that cost was a major impediment to the uptake of new ICT technology in 2016–17. Cost was more commonly reported as a constraint on grain and vegetable farms, which may reflect the relatively high up-front cost of ICT tools in these industries. Although relatively few grain or vegetable farms reported purchasing GPS, sensors or other hardware in 2016–17, cropping and vegetable farmers that did purchase these items spent considerably more on them than dairy or livestock farmers spent on the same items.

Farmers tended to connect to the internet differently to other business owners, mainly because of their location. According to the ABS, the most common type of business internet connection is digital fixed line (DSL) at 62pc of all businesses in the economy. However, the majority of farmers use connection types other than DSL, such as mobile wireless (28pc), fixed wireless (22pc) and satellite (15pc) as their main type of internet connection.