RURAL and regional voters should consider placing connectivity at the top of their list of priorities in the lead-up to next year’s Federal election, prominent Queensland red meat producer and processor David Foote told MLA’s annual gathering in Canberra this morning.

Much of this morning’s panel session under the title ‘transformation’ involved big-picture challenges and opportunities facing the red meat industry, covering topics like objective carcase measurement, genetics, supply chain coordination, eating quality and autonomous technology solutions. Almost all involve data collection and sharing in some form, but connectivity was identified as the big obstacle to extracting value out of available information. 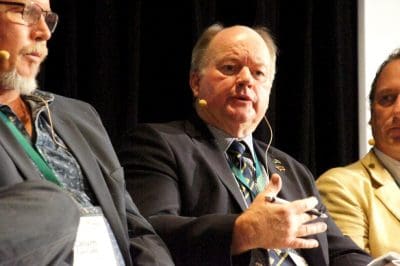 Mr Foote, chief executive of Australian Country Choice and Australian Cattle & Beef Holdings, said the connectivity that people across the bush had been offered was typical of what he called ‘bush resilience.’

“We simply put up with it,” he said. “We get along with what we’ve got, and don’t make enough noise about what we haven’t got.”

“In 90 percent of situations, the massive amount of industry research and development that is being done, and laid out for us – some of which has been showcased at this MLA gathering – cannot be applied, because of connectivity challenges,” he said.

“It’s not enough. We are wasting our efforts if we cannot apply what is being designed and developed in terms of new technologies, many of which rely on data capture and collection.”

Mr Foote urged all stakeholders to put connectivity at the top of their priority list when the Federal election loomed next year.

“We have an operation that is only 120km west of Toowoomba – two hours from a major capital city – which has zero connectivity. But we can have it for $264,000 a year, if I can get the bloke who has a tower 15km away to rent us some space. It is not acceptable,” he said.

“When National Broadband was developed and designed, Netflix had not been invented. Today, Netflix consumes 93 percent of the brandwidth of the NBN. And there’s probably something else out there being designed right now that will take up the last 7pc.”

“It’s all going to be there, without having to travel across every square kilometre of your country. Technologies like virtual fencing are the way of the future, but there is nobody ‘up there’ thinking about us at the moment.”

Mr Foote said he had had a discussion with a New Zealand livestock producer during this year’s Platinum Primary Producers conference in March, who did a pasture budget every Friday afternoon, by scanning every paddock on his property.

“Based on that information, he stocked that paddock for the week, working out whether it was under or over budget, to utilise the pasture grown and make fertiliser allocation decisions. That’s the sort of opportunity that’s out there with technology, but you cannot do that with a Coopers notebook any more.”

Another panellist in this morning’s session in Canberra, Western Australian beef producer Calum Carruth, outlined his experiences in installing his own whole-farm connectivity system. 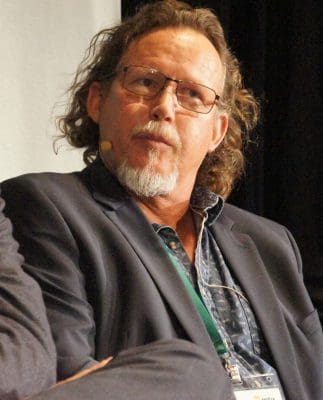 Mr Carruth, from Murchison House station near remote Kalbarri, has installed a whole-farm monitoring system which has significantly reduced time and cost associated with livestock management.

The first phase was a water monitoring system controlling all tanks, flow meters and switches.

“Instead of a 250km drive through rough country to check waters multiple times each week, the system delivers an alert, via mobile phone, if stock water levels drop below pre-set limits,” he said.

“Even in this first phase, the vehicle maintenance and running cost savings alone will be significant – without even factoring in that we can target staff in other duties, rather than a regular water runs.”

The catalyst for change on Murchison House was the limitations under the Skymuster system that Telstra used as a replacement for NBN, he said.

“If my son hooked-up with his mates online and spent a few hours gaming, we could not download emails any more. It was costing $100 for 75GB a month,” he said.

“We’d been looking for a solution for a while, and made contact with a farmer who had already installed a realistic option for internet connectivity.”

A tower was installed on a nearby hill, beaming a signal back to the homestead.

“We now have proper 100GB speeds and unlimited download that our business really needs. It turns out we are using about 500GB per month, as a business, rather than the 75GB we were offered by NBN,” Mr Carruth said.

“Once we made that decision to install the system, we had a brainstorming session, and started looking at prospects for remote water monitoring. I was very wary of this, because I’d heard a lot of promises in ag-tech, but hadn’t seen much delivered.”

“But after talking about it and realising just what was possible, we partnered with MLA and Origo to install a whole-farm connectivity system, now up and running, and delivering real results.”

Mr Carruth will discuss the project in greater detail during MLA’s digital forum on Friday.

MLA’s Sean Starling told the forum 500GB of data was “about what was needed” to run a grazing business trying to use new technologies these days, but mainstream telco’s were offering “a hell of a lot less than that.”

“As an industry we definitely need to support our producers who need this service,” he said.