For centuries Swiss farmers have attached bells to their cows to make them easier to find when free-grazing alpine meadows. 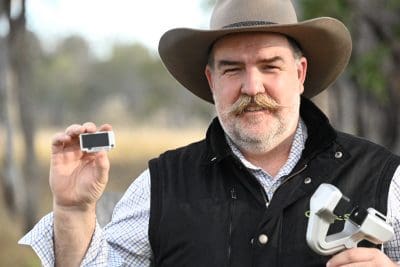 Australian-developed Ceres Tags which enable animals to be tracked via satellite are now being trialled on mountain roaming cattle by the Swiss Government owned Identitas.

In addition to providing direct-from-satellite location data, the Ceres Tags are also helping to underpin the provenance of Swiss livestock products.

“With this authentication they can market their chocolate and their milk products with much greater confidence,” Ceres Tag founder and CEO David Smith said.

Switzerland is one of 18 countries to which Ceres Tags have sold since the AgTech product’s official commercial launch at Beef 2021 in Rockhampton in May.

Mr Smith told Beef Central this week that demand for the multi-functional ear tags has been strong from all over the world since the product was launched.

However he estimated that if not for the well-documented global shortage of micro-processors this year, the company could have sold many more tags than it has been able to over the past six months.

“We’re selling as many as we can but there is a global microchip shortage,” he said.

“We could have sold probably five times more than we have.

“We have got people waiting out until March currently for tags.

“That is why we’re saying actually get in now because that is just about sold out and we will go into April soon.”

Mr Smith said one of the more common responses he has had from producers who have been using Ceres Tags for the first time is that they “thought they knew what their animals did”, and have been surprised to see what location data actually shows.

Meanwhile Ceres Tag was awarded one of the nation’s top awards for product design at the Australian Good Design Awards last month.

It was awarded the Good Design Award Gold Accolade in the Product Design category in recognition for outstanding design and innovation, in addition to the prestigious Powerhouse award.

Judges commented on the innovative nature of the direct to satellite aspect of the ear tag and the customisability of the information it provides for those who manage livestock. They also described the plug and play aspect as “powerful”, as it circumnavigated complex installation processes.

“The user interface with clean and easy to navigate and the long battery life (10 years) is a fantastic feature,” judges comments’ noted. “The no infrastructure, no maintenance, no subscription aspect of the design also respects farmers’ fluctuating income cycles. This design solution can improve farm efficiency, management and make life easier for farmers. Well done.”

The Australian Good Design Awards are the country’s oldest and most prestigious international awards for design and innovation, dating back to 1958. More details available here